Posted on March 1, 2022 Categories: Comments are off for this post 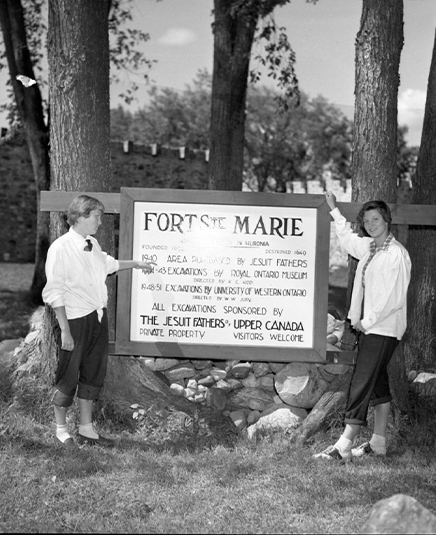 At the end of the Depression, it took three years of appeals for director, Fr. Lally to collect the $4,000 purchase price of the Sainte-Marie property from a local businessman. It was a top priority. With the site now finally back in Jesuit hands in 1940, Fr. Lally wanted archaeologists to get busy unearthing the site, so he encouraged, first, Professor Kenneth Kidd of the Royal Ontario Museum and, then, Professor Wilfrid Jury to supervise teams of diggers — for whom he provided room and board at the Shrine Inn.

The biggest find of the digs came in August, 1954 when Fr. Denis Hegarty uncovered in the Sainte-Marie chapel a lead grave plaque which read, “Père Jean de Brébeuf bruslé par les Iroquois le 17 de mars, l’an 1649” which translates to, “Father Jean de Brébeuf burned by the Iroquois on March 17, year 1649.” This novel discovery occurred five years after the Tercentenary celebrations of the deaths of those Martyrs. A trainload of pilgrims came from Quebec City with Archbishop Maurice Roy taking personal charge of the skull of Brébeuf which came up the hill in a solemn procession. Premier Robert Schuman of France was there too. Cardinal James McGuigan of Toronto led the welcoming party.