In 1639, Fr. Jérôme Lalemant, superior of the Jesuits serving the Wendat peoples, proposed to them the establishment of a single permanent residence and mission centre, at the heart of their nation, dedicated to Mary. His vision, to have a ‘house apart’, a place of ‘retreat’, ‘meditation’, and ‘peace’, from which to set out on mission ‘conveying to the nations the holy name of our Lord’. The result, a centre of diverse apostolic ministry that offered spaces of cultural encounter, pastoral care, catechesis, retreat ministry and spiritual direction, writing and research, rest and renewal, medical care, and training, that was mostly self-sustainable and integrated into its natural environment.

The evangelical efforts of the Jesuits and their lay collaborators in this mission, found its apex, in varied circumstances, that invited eight of them to offer their lives in the service of the Wendat people. Subsequently, Jesuit fathers Jean de Brébeuf, Gabriel Lalemant, Charles Garnier, Isaac Jogues, Antoine Daniel, Noël Chabanel, and lay companions Jean
de Lalande and René Goupil, were canonised martyrs by the Roman Catholic Church in 1930. Recognising the magnitude of both their role in the early history of Canada and their Christian virtue, the Church of St. Joseph was built as a site of pilgrimage in 1926 and their original mission of Sainte-Marie, at the feet of Martyrs’ Shrine, was reconstructed by the Provincial Government of Ontario, as a historic site and living history museum, in 1965. Subsequently, in 2014, the Society of Jesus in Canada re-emphasised the importance of this National Shrine, and the ministry here, by establishing a permanent, year-round, Jesuit community and residence.

Continuing the Mission of Ste. Marie

Nestled by the Wye River, along the shores of Georgian Bay, amidst the traditional lands of the Wendat people, Martyrs Shrine is situated adjacent to the original Jesuit mission of Ste. Marie I (reconstructed at Sainte-Marie among the Hurons) – the central residence of St. Jean de Brébeuf and his companions. Crossing time to the present day, Martyrs' Shrine continues to offer the diversity of service born from the original mission site of our forbearers, offering a home of reflection, education, and spiritual discovery. The story of Martyrs' Shrine is holder than Canada itself and an odyssey into the great human virtues of love, compassion, generosity, and interculturation that shaped our. nation as we know it.

The eight men that we honour here at Martyrs' Shrine, who had left France to brave the precarious journey across the Atlantic and entered the rugged lands of the Canadian wilderness, arrived with the hopes to serve the Indigenous peoples. As then, their notions of self-offering love and discovery forms the spirit of this site now.

Today, Martyrs' Shrine welcomes over 100,000 pilgrims and visitors each year, continuing to serve people from across the world, and from all faiths, cultures, and beliefs. We offer visitors the occasion for a deepening of their faith and a step forward in their journey towards a deeper relationship with God. 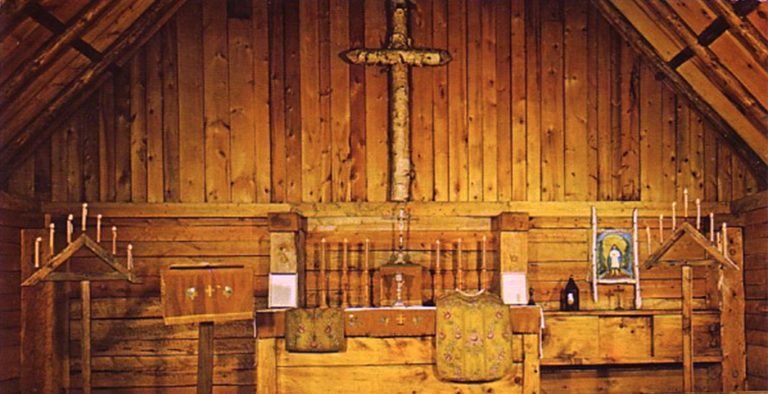 Martyrs' Shrine operates under the leadership of a diverse team of Jesuit priests, lay-staff, and Board of Trustees, who bring with them various and diverse skillsets put to the service of others. Our team ensures strong community-centric leadership, responsible financial management as well as certifies the important issues the Shrine aims to tackle or support, whilst providing general day-to-day organization and operation for this holy and historic site.

Rosemary Vyvyan
Vice-Chair, Board of Trustees

Sherry Chapman
Board of Trustees

Rosella Kinoshameg
Board of Trustees

Sue St. Amant
Board of Trustees

Louise Leone
Board of Trustees

Louise Leone
Chair, Board of Trustees

Betty Valentine
Board of Trustees

David Peters
Board of Trustees