Our Liturgy > Light a Candle

Lighting candles has long been a sacred ritual in all traditions, creating precious moments in our own and other people's lives where we pray for loved ones, friends, and ask for or give support.

Tradition of Lighting a Candle

The lighting of candles in prayer has long been a sacred ritual in many different religious traditions, a special moment in both our own and other people's lives where we pray for a personal intention, or for loved ones, or friends asking for divine aid.

In Judaism, a perpetual light was kept burning in the Temple and the synagogues not only to insure the ability to light other candles or oil lamps in the evening but also to show the presence of God. Later, the Talmud prescribed a lit lamp at the Ark, where the Torah and other writings of Sacred Scripture were kept, to show reverence to the Word of God. This practice probably influenced our own tradition of having a lit candle near the Tabernacle to indicate the presence of and to show reverence for the Blessed Sacrament.

Christians adapted the use of lit candles for Mass, liturgical processions, evening prayer ceremonies, funeral processions, and, again, to show reverence to the reserved Blessed Sacrament. Moreover, there is evidence that lit candles or oil lamps were burned at the tombs of saints, particularly martyrs, by the third century, and before sacred images and relics by the fourth century. However, this practice likely existed well before our available written evidence.

In our Catholic tradition, in early times as well as today, light has a special significance - Christ. Recall Jesus said, “I am the light of the world. No follower of mine shall ever walk in darkness; no, he shall possess the light of life” (John 8:12) and “I have come to the world as its light, to keep anyone who believes in me from remaining in the dark” (John 12:46).

With this background, we can appreciate the usage of candles. Here, as in early Christian times, we light a candle before a statue or sacred image of our Lord or of a saint. Of course, we do not honor the statue or the image itself, but whom that statue or image represents. The light signifies our prayer intention offered in faith coming into the light of God. With the light of faith, we petition our Lord in prayer, or petition the saint for intercession - to pray with us and for us to the Lord. The light also shows a special reverence and our desire to remain present to the Lord in prayer even though we may depart and go about our daily business.

What is a prayer intention?

A prayer intention is the person or thing meant to benefit from your prayer or religious offering, to be remembered, said or written while you light a candle.

Each day, visitors from all over the world light candles at Martyrs' Shrine as an act of prayer in honour of a loved one or a special life event. The Shrine Votary is the site of our main collection of votive candles meant to enhance prayer and reflection. The Votary is located next to the Shrine Church behind the Lourdes Grotto.

Several electric votive candle stands are available within the Shrine Church for the faithful who wish to light a candle in prayer. This is part of the continued effort to provide parishioners more opportunities for prayer and devotion to our Lord. 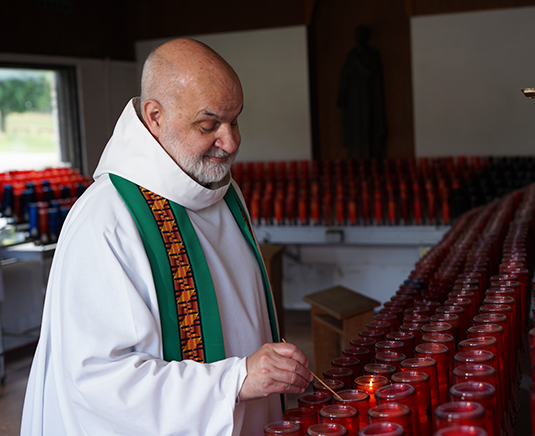 For those unable to visit the Martyrs' Shrine, you can request one of our resident Jesuit priests to light a candle on your behalf.