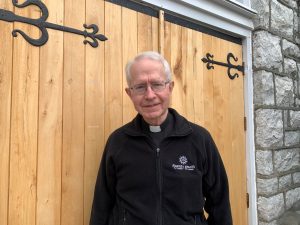 Fr. Robert Foliot was born in Montreal, entered the Jesuits in 1962 and was ordained a priest in 1973. He was the pastor of numerous parishes – St. Ignatius Parish in Winnipeg for 15 years, Our Lady of Lourdes Church in downtown Toronto for a total of 10 years, and among the Indigenous people of Manitoulin Island for 7 years. He was the Rector of Regis College in Toronto and Director of the National Jesuit Development Office. For a total of 9 years, he served as the Superior of the Pickering Jesuits and the director of the Jesuit Infirmary. He joined the staff at the Martyrs’ Shrine in Midland, Ontario in September 2021.