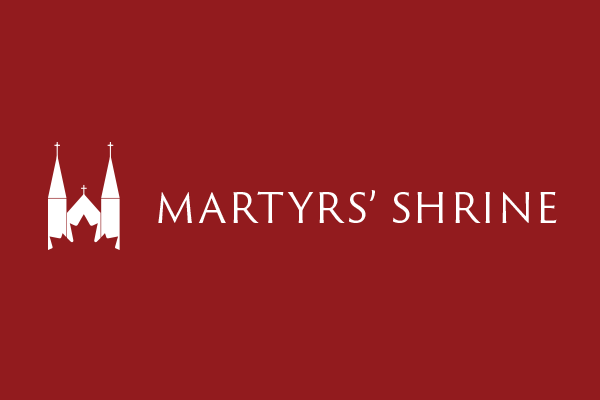 Introduction of the Thank you Award Recipients

The Exceptional Support Category recognizes individuals who have supported the Shrine over many years with their personal interest, special labours and dedication.

The Exceptional Service Award is given to the following:

Robert Sykes is the current Deputy Grand Knight of the Midland Council of the Knights of Columbus and also the Chair of the Northern Zone for the Knights of the Archdiocese of Toronto. Robert has been a longtime friend of the Shrine and is also a past trustee of our board. He has played a huge role in gaining support for the Martyrs’ Shrine from Knights of Columbus Councils and Assemblies. He has been instrumental in the recent ‘Greening of the Shrine’ projects, including the replacement of all our lighting with L.E.D. lights, the installation of solar panels, and the shift from electric to natural gas heating in several of our buildings. And Robert continues to advocate for Martyrs’ Shrine. Thank you Robert.

Steve Catlin is a high school teacher in Hamilton. One year when Fr. Jim Farrell was Director of the Shrine, Steve volunteered to catalogue and care for the Shrine’s historical documents and artifacts. Now, 23 years later he continues to dedicate each summer to improving and growing our archives. His deep love for the history and story of the Martyrs has motivated Steve to create attractive and informative displays in our museum and to expend considerable personal time, energy and resources to purchase historical artifacts and publications that relate to the 17th Century missionary efforts of the Jesuits and the relationship with the First Nations’ people. He has also assisted in the publication of the translation of the Jesuit Relations and other letters and texts pertaining to the life and work of Jesuits among the Native People. Thank you Steve. 2

The Outstanding Support Category focuses on individual and unique actions by those whose support has greatly impacted the Shrine in a special way.

The Outstanding Service Award is given to the following:

Grace Kidd, owner of Bayside Realty Inc. Brokerage, spearheaded the first Tiawenk fundraising dinner and Auction in 2014. She and her committee helped to raise the profile of the Shrine locally and beyond, and brought many new friends and donors to the Martyrs’ Shrine. Thank you Grace.

We would like to recognize the hard work and dedication of Rick Hayward who has joined the Shrine board in the past year. His efforts and drive brought the very successful Commodores Dinner and Boat Blessing Event forth in 2013 and 2014. As a standing member of the Board, Rick is not eligible for a formal appreciation award at this time, but on behalf of the board, we are pleased to acknowledge Rick’s strong support for the Martyrs’ Shrine during these two years. Thank you Rick.

We thank Ken MacDonald, Director of Marina Operations at Parkbridge Lifestyle Communities, Midland Ontario, for his involvement with the Commodore’s Dinner and Boat Blessing, especially for being the Commodore for 2013 and for providing immense support for these events with the involvement of his staff, friends and volunteers. Thank you Ken.

We are grateful to Frank Morneau, Executive Chairman of Morneau Shepell Ltd. and Morneau Shepell Inc., who is a longtime friend of the Jesuits of English Canada and a well-known friend of the Martyrs’ Shrine. Frank was directly involved with the 2013 and 2014 Commodore’s Dinner and Boat Blessing, having offered his yacht, La Belle Hélène, as the anchor platform for blessing the passing boats. His role as Commodore for the 2014 events and his personal donations are greatly apprecia